Optical coating technologies are key to modern optical systems allowing to produce mirrors, filters and other components with unique capabilities. For decades advances in this area have been driven by demand for more precision and functionality in laser, defense, medical and other high-performance applications. Today, using state-of-art fabrication technologies such as ion beam sputtering, evaporative deposition or advanced plasma sputtering, optical industry can produce thin film structures made of hundreds of layers at high speed and affordable cost. The article will review common fabrication methods and their applications.

Optical coatings are one or multiple layers of material, usually dielectric and metal, deposited on the surface of optical material. The coating alters the way in which optical component transmits or reflects the light. It takes advantage of the way light is refracted or reflected as it passes through several layers with different indices of refraction. Depending on the type of effect created by the coating, they can perform variety of functions. The common application are anti-reflective coatings, which are used to reduce unwanted reflections from the optical surface (such as in everyday corrective glasses). On the other hand, reflective coatings are used to produce mirrors with high level of reflection. Polarization control, wavepass filters, optical beam splitters are other examples of applications in which thin films allowed significant size and cost reductions of many devices.

The state-of-art optical coatings provide high stability and can withstand wide range of temperatures, humidity and mechanical stress. The quality of optical coating is influenced by several factors. Starting with the design, performance depends on the structure and number of thin layers that make up the stack, their thickness, quality of materials and their refractive index. Since the first single-layer antireflection coating was introduced in 1930s, the industry has made a tremendous research and development effort that spurred new coating solutions and design tools. At the heart of these advancements are stable and repeatable optical thin film deposition technologies and processes.

Optical coatings are produced using several deposition technologies. In principle there is always a target material (also known as source material, which is a portion of the material to be deposited on a product) and substrates, which are the optical elements that require thin film layers. The technologies applied differ between each other in terms of deposition technique, i.e. how the target material is transferred to substrates.

In this article we review the most typical, industry standard technologies with a proven quality, efficiency and productivity. We address the fundamentals, pros and cons as well as applications of E-Beam, Ion Beam Sputtering (IBS) and Advanced Plasma Sputtering (APS) technologies. Each provides a unique strength and weaknesses, in terms of capabilities and costs.

E-beam vapor deposition involves bombarding the source material with electron beam in a vacuum chamber to make it evaporate and deposit on the optical components, which are usually placed on the rotating planetary work-holders. In order to improve nucleation process and create more dense films, the optical substrate is heated to temperatures of up to 300OC. The resulting coatings are characterized by low strain and can be applied to wide range of component materials and geometries, including custom-shaped optics. However, they are of low density and porous. This makes them prone to an environmental shifting phenomenon, which means film’s refractive index can change when exposed to humidity. Ion-Assisted Electron-Beam (IAD E-Beam) additionally uses ion gun to bomb the substrate with a beam of highly accelerated ions to increase energies of the deposited atoms. Higher mobility of the molecules results in a denser film compared to standard e-beam technology, but also increases stress.

Apart from the film quality, the other downside of e-beam processes is low stability and errors. The evaporation process is challenging to control and as such can yield coatings with inconsistent performance. Thus, E-Beam PVD is a preferable deposition method for:

with low number of layers.
The advantage of the method is high flexibility, relatively low cost and high efficiency, as IAD E-Beam chambers allow for processing components in large batches. Thus, it is preferable technology for high-volume optics production, where productivity gains justify limitations in performance.

Ion Beam Sputtering is a stable and repeatable technology which uses ion beam to produce high-quality coatings in a highly accurate and predictable manner. It uses an ion gun to produce an extremely high-energy ion beam which bombards the source material and through the transfer of kinetic energy sputters particles from its surface. The energy of the sputtered particles makes it easily condense on the substrate forming a uniform and dense thin film layer. The technology produces dense and smooth coatings which are not affected by environmental factors and immune to temperature or humidity changes. Because the process involves a strict control and allows tuning of each material layer parameters, IBS allows for highly repeatable results and high yield across variety of coatings and substrate materials.

The downside of IBS is high cost of equipment and relatively high unit cost due to limited throughput and slow growth rates. This is the reason IBS is mostly deployed for applications that focus on high precision (including spectral precision), such as

Advanced Plasma Sputtering (APS) strikes a good balance between efficiency and performance, as the technology is fit for high-volume production while maintaining dense and accurate thin film deposition. As such, APS combines high throughput capabilities of evaporative deposition with quality comparable to that of IBS. APS uses hot cathode DC plasma source to produce a plasma that fills an entire chamber and sputters loose material ions from the target, which then deposit on the optical component. APS is well proven to produce complex structures, of more than 200 layers, without compromising precision, optical density or transmission features. Plasma Assisted Reactive Magnetron Sputtering (PARMS) is a version of APS which also uses plasma to sputter ions from source material, but in order to accelerate deposition rates, the plasma is guided to the target surface by a magnetic field produced by magnetron sources.
The cost and performance advantages of plasma-assisted technologies make it a preferable method for fabrication of:

Especially in the military, medical or chemical markets, where optics need to adhere to strict quality standards, while the price still give an edge over competitors.

Optical industry has many coating technologies to choose from and the choice is not always transparent. As discussed above, each option comes with its own advantages and limitations in terms of quality, price and production times. The right technology needs to be able to meet both performance specification of the optical system and its cost goals.

We recommend contacting Solaris Optics engineers if you are seeking to select a suitable optical thin film deposition technology. 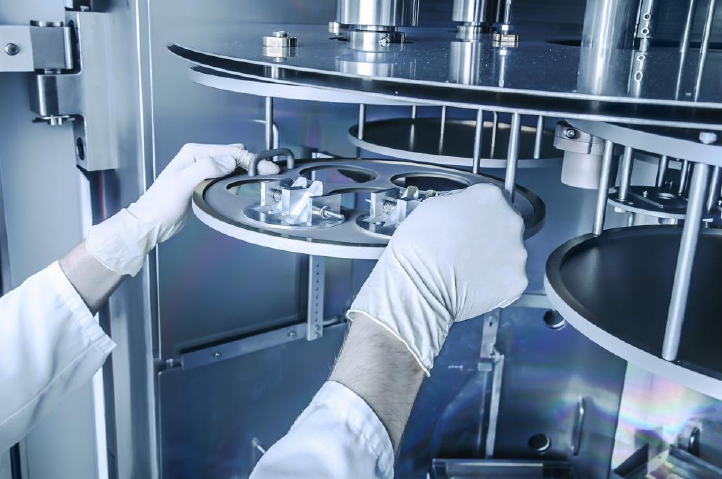