Solaris company Introduction
Solaris Optics S.A. manufactures user-specific optical components and laser modulators.
Founded in 1991, Solaris is a medium-sized ambitious enterprise with more than 70 employees and modern machinery and laboratory equipment. The company operates from its own 4744 m2 production and service building and is equipped with the full technology for production of optical components, starting from raw materials in block or rod shape on basis of nearly all existing optical glasses, fused silica, ceramics and crystals.

Purpose of the Project

Why the cylinder? The cylindrical mirror is one element in the Coudé train used for astigmatism compensation in the system.

Goal: To minimize the surface error much below full aperture specification to test the company technology limitations.

2. Stress mirror polishing (SMP) of a Zerodur flat is used to:
Introduce the cylinder surface form

3. Magnetorheological Finishing (MRF) is used to:
Correct the residual error from the SMP

Cylinder is measured with SSI

High Precision Metrology Using SSI
SSI provides high precision measurement for MRF target maps and for final element verifications. Calibration of the transmission element ensures accurate pixel scale and error mapping. Reference wave error is calculated and removed for each measurement.
The cylinder has ~27 µm of departure and can be measured on the SSI using a transmission flat.
The full aperture of the transmission flat can be masked to capture a subaperture that is within the Nyquist limit of the system.
Stitching smaller subapertures together allowed us to measure the cylinder as the deviation from a flat.

Fringes from an off-axis subaperture

1. Square, plano, zerodur block is glued to the
metal bars.

3. Block has been ground and
classically pitch polished.

4. Load removal: concave cylindrical shape with
the PV close to the specifications.

5. The block is then rounded to the final
204 mm diameter.

SMP to induce cylindrical surface form
The SMP process introduces the preliminary cylindrical shape:
Reduces the time needed to MRF the cylinders
Reduces the amount of the material needed to be removed by MRF
Reduces the number of MRF/SSI iterations needed
CMM was used to adjust the initial SMP block deformation.

Surface before and after SMP

The residual surface form and figure remaining after SMP was at the level of
5 microns PV. The amount of the material needed to be removed
by MRF was reduced by 5x.
Finishing High Precision Optics with MRF
MRF has a proven track record for finishing optics to <λ/20 PV. MRF can be used to ‘aspherize’. The combination of inducing surface form and figure correcting with MRF has been demonstrated. (C.Maloney et al. Optifab 2015)
Novel MRF method for rotational polishing a mild cylinder
Rotational MRF polishing was used for non-rotationally symmetric cylindrical shape
Typically, the gap of MR fluid between the MRF wheel and the part should remain constant during polishing
We input the geometry of a flat resulting in around 30 microns of gap error during polishing
Still convergence on high precision specifications has been achieved

Cylindrical mirror glued to the invar cell Completed cylinder
The cylinder surface form was prepared before MRF by means of stressed mirror polishing, which strongly reduces the polishing time.
The novel capability of the mild cylinder figure correction using the rotational polishing mode of MRF was demonstrated.
The novel capability of mild cylinder SSI measurement as a deviation from flat has been proven.
The goal of going significantly below the full aperture specifications was achieved.
The stability of the results were confirmed based on multiple cylinder measurements.
Five cylinder elements were completed according to the specifications as requested. 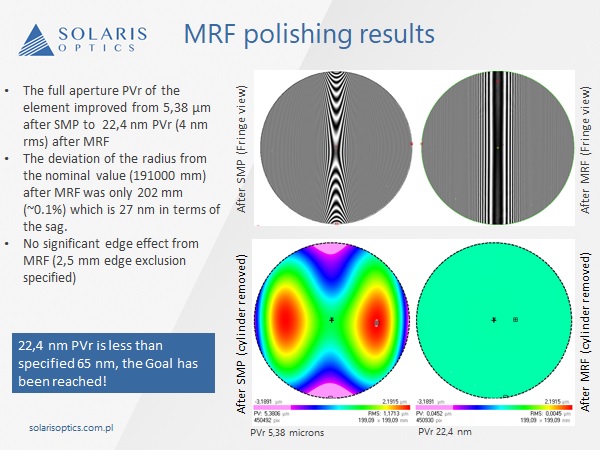 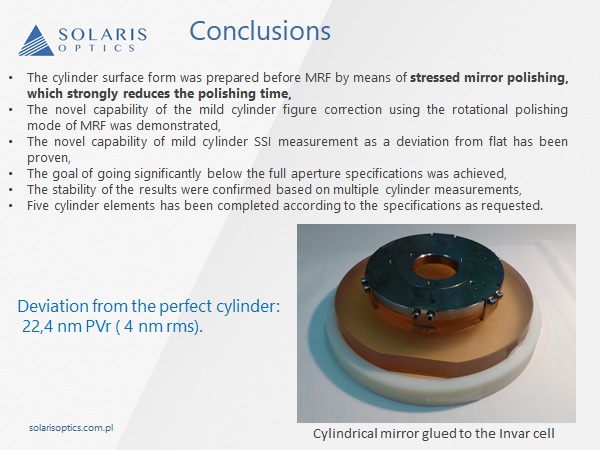 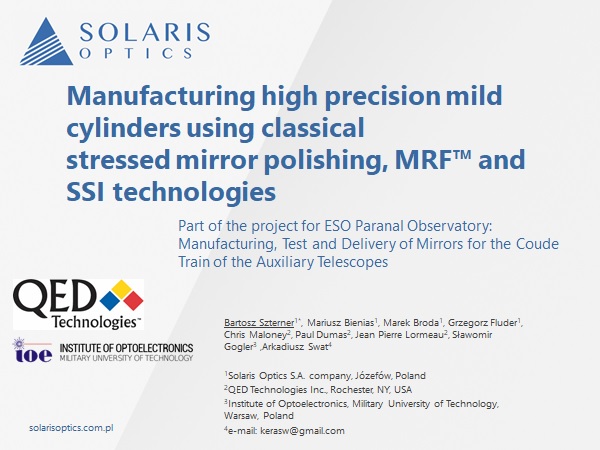 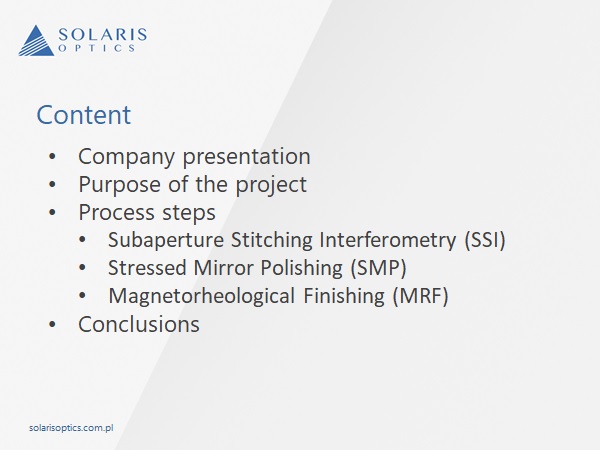