Pockels cell is an optical device which can modulate the polarization of the passing light with the application of an electric field. The electro-optical phenomenon, also known as the Pockels effect, was first discovered in the 19th century and since then has become an enabling technology for a range of modern photonic applications, from ultra-fast lasers to precise light modulators.

Pockels cell rise to prominence in modern optics has been largely fueled by their price, performance, and reliability advantages. The device consists of an electro-optic crystal that experiences a linear change of refractive index under the application of voltage via attached electrodes. The crystal is isotropic along the optical axis, so that when linearly polarized light passes in the direction of the optical axis, the polarization is not changed. However, an external electrical field causes the crystal to become birefringent which induces a phase shift in the propagating light wave. As a result, a phase of the light beam can be modulated with high accuracy and speed by an electric signal.

Pockels cells can be classified into two major groups depending on the direction of the electric field. Longitudinal devices, where the electric field is applied in the same direction as the light beam, have the advantage of high apertures and are mostly used for Q-switches and light shutters. Transverse devices, with electric field passing perpendicularly to the light beam, are generally used for smaller apertures, but require smaller switching voltages. For the latter group, half-wave voltage depends on the electrode separation and the larger aperture requires higher voltages. The common figure of merit is half-wave voltage Uπ, a voltage required to induce a phase shift of π, i.e. half optical length. When Pockels cell is used in amplitude modulator, it means half-wave voltage makes the system go from minimum to maximum transmission. In both longitudinal and transverse devices, typical half-wave voltages are in the range of up to thousands of volts.

The choice of the crystal depends on several factors, of which most important are transmission range (wavelengths), switching frequencies, power density or beam size. Pockels effect can be observed only in certain crystals that lack a center of symmetry and the common options are

KDDP is praised for its high performance-to-cost ratio, ease of adjustment, and large apertures. It is well suited for applications operating in the visible to infrared range, making them a standard for Nd:YAG lasers Q-switching. 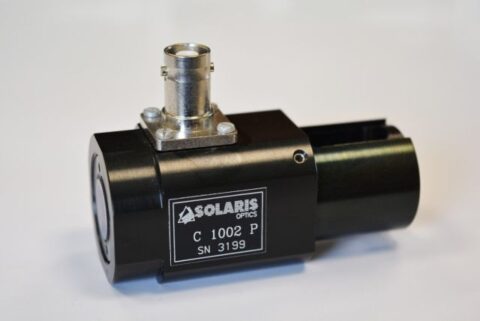 BBO-based elements thanks to their high damage threshold are used in high power systems in the range from UV to NIR, one of the common applications being solid-state lasers with high average powers and high repetition rates. While most of the KDDP-based Pockels cells are longitudinal devices, BBO are usually fabricated as transverse devices because of the more challenging crystal growth process.

Lithiumniobate (LiNbO3) crystal is well suited for low power applications in range from 400nm up to 4500nm and has the additional advantage of relatively small half-wave voltage. Unlike KDDP and BBO crystals, lithiumniobate is not hygroscopic and does not require any additional protection from atmospheric moisture. 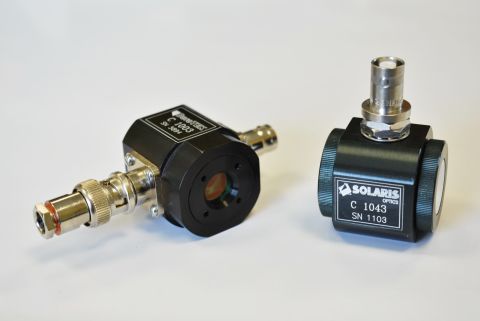 Regardless of material, Pockels cells require advanced crystal growth methods and a highly precise manufacturing process to ensure perfect geometry and accurate alignment. The fabrication must secure the crystal from any strain or defects, as well as ensure strict dimension tolerance and flatness as not to induce wavefront distortion.

The most popular use for Pockels cells includes laser applications, where these elements are widely used for Q-switching, modulation, pulse picking and pulse slicing. Electrically induced birefringence in the photonic crystal can be used to control intense laser beams with high speed, precision, and repeatability. The ability to produce short, high-power pulses has made Q-switched lasers a staple technology in broad range of applications, including medical, industrial and scientific:

The Q-switching technique relies on modulating quality factor Q of a resonator to produce high-power laser pulses in nanosecond range. This can be achieved by placing a shutter made of a polarizer and a Pockels cell inside the laser cavity. When the appropriate voltage is applied between the electrodes of the Pockels cell, the switch is in a non-transmissive state and the light is blocked by the polarizer. The Q is low and the laser gain medium builds up to a maximum inversion density. When the voltage is rapidly removed, the light changes its polarization by 90 degrees and the polarized beam inside the cavity passes through both elements. The Q quickly jumps from low to high producing a high-energy laser pulse in the duration of tens of nanoseconds. A related technique called cavity dumping, also based on the Pockels cell-based switch placed in the laser cavity, is used to produce laser pulses of a few nanoseconds duration.

Pockels cells are widely used for light intensity modulation when placed between two polarizers perpendicular to each other. When no voltage is applied, the uniaxial crystal does not change light polarization and the beam is blocked by the second polarizer. However, when the applied voltage induces a birefringence in the crystal, it changes the light’s polarization from linear to elliptical. Depending on the applied voltage, some of the light can be transmitted through the crossed polarizer. In a special case, when half-wave voltage is applied, the plane of polarization is rotated by 90 degrees and all the light can pass through the switch.

Solaris Optics manufactures Pockels cells based on Lithiumniobate and KDDP crystals. Please do not hesitate to contact us, we are happy to discuss your application of Pockels cells! 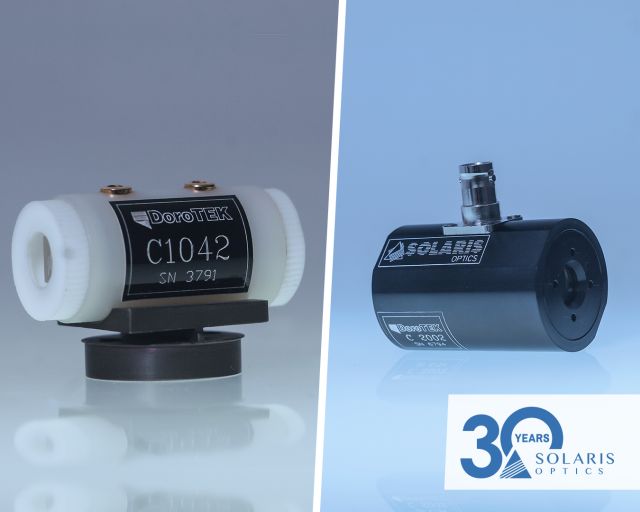