Mr Ryszard Wodnicki, PhD Eng, is a co-founder of Solaris Optics and a scientist responsible for the development of Pockles cells technology in the company. In todays’ interview we discuss about Pockels cells technology, applications, design, manufacturing and selection. We aim to provide necessary information and explanations to design engineers who seek Pockels cells for their projects.

Dear Dr Wodnicki, let’s start from the basics – what is a Pockels cell?

Pockels cell is a device, an optical subsystem, which modulates light. It utilizes an electrooptical effect (so-called Pockels effect), which is a change of refraction indices of the optical material when an electric field is applied. This effect, named after the discoverer, appears only in crystal materials, typically anisotropic crystal (i.e. having different refraction indices in different directions). Refraction indices of such anisotropic crystals are typically described in a form of an ellipsoid called indicatrix.

A Pockels cell uses birefringent crystals (having two values of refractive index) and such configuration of the light and the electric field in the crystal, so that the best effect of modulation is achieved.

Pockels effect is a linear effect, which means the refractive indices change proportionally to the value of the applied electric field. By comparison, another known electro-optic effect – the Kerr effect is non-linear so that the refractive index values changes are proportional to square values of the electric field. Hence it is not commonly applied – not only requires high voltages but also takes place in liquids, but also due to other assisting phenomena.

What are the main types of Pockels cells nowadays?

There are two main types:

What about applying a voltage to the beam input/output surface in the case of longitudinal effect? Isn’t it challenging?

Yes, it is. To have high transmission of the cell, the electrodes are manufactured as rings on the side surface. If a crystal is of cylinder shape, along which travels the light beam, then the electrodes are made as rings localized on the lateral surface at both ends of the cylinder. It is a so-called Cylindrical Ring Electrode (CRE) configuration. But, such a setup, by definition does not give a homogenous field, because the electrodes are not made directly on the optical surfaces of the crystal. Therefore the crystals shall have appropriate lengths so that a maximum of field uniformity can be achieved. In Solaris Optics we achieve about 97% of uniformity of the field in such standard configurations.

So, given the fact that in longitudinal Pockels cells the electric field is inhomogeneous, why actually use them? Why not use only transversal Pockels cells?

The most common application of Pockels cells is the switching of losses in laser resonators (Q-switch) in order to generate short, high power laser pulses. In these applications, the uniformity of the electric field distribution in the crystal doesn’t have to be high. Uniformity of 95% is quite sufficient even for lasers with a high gain of laser medium.

Crystals of the KDP-group (especially KDDP) were developed quite early. They are grown from water solutions. Unfortunately, they are hygroscopic (attract water from surrounding environments) and require protection against atmospheric moisture. Nevertheless, this technology was developed tens of years ago. Nowadays it allows obtaining homogeneous optical elements from KDP and KDDP crystals with dimensions up to several hundred mm.
For application as Q-switches, Pockels cells with apertures of up to about 15 mm are needed. Using KDDP crystals with CRE electrode configuration, Pockels cells can be not as expensive as others with transverse effect.

What is the relevance of crystal size?

From a grown crystal a homogenous piece must be selected, then a monocrystal can be cut for a Pockels cell.
In addition to Pockels cells with apertures down to 15 – 20 mm, a wide range of applications require cells with bigger apertures such as 50 mm and more. This is where KDP and KDDP crystals are used.

In the case of other crystals, such as Lithium niobate (LiNbO3), where only transversal electrooptic effect occurs, the driving voltage depends on the crystal width to length ratio. This allows for a significant reduction of the Pockels cell driving voltages.

Such crystals are grown in more challenging conditions, and generally, the growth is more complicated. Hence only relatively small dimensions of crystals can be manufactured. To produce a LiNbO3 Pockels cell with an aperture of 20-30 mm, we are already on the limit of technological capabilities. So, when a small aperture is needed, then a transversal Pockels cell from lithium niobate, lithium tantalate (LiTaO3), or recently also barium borate (BBO) can be used. Those are offered in apertures of 5-6 mm and their prices are high compared to e.g. KDDP Pockels cells.

Why do we actually need a larger aperture?

An aperture is a cross-section dimension, where enters the beam. If the beam diameter is of few mm, then a 5 mm aperture of a crystal is sufficient. However, for a beam of 10 mm in diameter, the aperture shall be about 12-15 mm – this depends on specific application.

Do Solaris Optics clients already know what Pockels cell they need or are they asking an advice?

There are both types. Some clients require advisory. In Solaris Optics we developed designs for KDDP and lithium niobate and within those crystals, we can move. For visible (VIS) and near-infrared (NIR) spectrum KDDP Pockels cells are quite convenient, as there are no limits towards aperture size. They are commonly used as Q-Switches. In many applications, there are also niobate crystals applied with a transversal effect and low control voltage, but they have other disadvantages, such as lower resistance to laser beam power or, as small crystal (aperture) dimensions.

Well, this is not a goal by itself, but e.g. in the case of KDDP, we are talking about kilovolts, so high by definition. However, when it comes to niobate crystals, it is possible to steer those with a lower voltage. But when a high frequency is necessary at a higher voltage, it requires a more complicated control setup (e.g. to achieve the required voltage amplitudes at high frequencies). If voltage is few times lower then the driver size is few times smaller. This gets very relevant in e.g. medical, industrial or defense applications.

We can group typical applications into few categories:

What are the most relevant specifications of a Pockels cell from a perspective of a design engineer?

A client ordering a Pockels cell shall explain to us the optical specifications:

So, how shall a design engineer start to select good Pockels cells, what to remember of?

Well, the first thing to think of is the cell aperture and type of crystal. Type of crystal is defined by wavelength, transmissivity and damage threshold, for instance, niobate crystals are characterized by lower damage thresholds, whereas KDDP higher, so are applied for higher power lasers.

Also, systems’ working conditions are relevant, e.g. is it for a Q-switch or amplitude modulation. Based on such information a Pockels cell type can be selected.

What sort of Pockels cells are manufactured by Solaris Optics?

In Solaris Optics we developed and manufacture Pockels cells with the following crystals:

What are the main applications of KDDP and lithium niobate-based Pockels cells?

There are many applications, as mentioned above. The main is Q-switch and modulation outside the laser resonator, pulse shaping and pulse picking. It is used in industry, healthcare, military, research and development.

What is the most critical when manufacturing Pockels cells?

Attention shall be put mainly to the crystal. Apart from crystal, there are mechanical and electrical issues with housing – it must be precise. The electrodes are golden Au coatings deposited directly onto the crystal – the connections must be reliable and harmless.

In the case of KDDP, also crystal protection against atmospheric moisture.

Regarding crystal, the orientation of the optical axis, as well as the processing of the input/output surfaces, must be accurate. In specifications, the parallelism of the surfaces is typically 20 arcsecs. It is relevant, because it may cause beam deflections and wavefront deformation.

So, it is the parallelism of input/output surfaces, wavefront deformation, accuracy of optical axis orientation, AR coatings.

What about reliability of Pockels cells, what issues may appear during operations?

A Pockels cell is selected for a specific laser and its application. A number of criteria are taken into account, such as required pulse parameters, repetition rate, driving voltage, contrast ratio, switching speed, damage threshold and others. An important parameter is the intensity distribution in the laser beam cross section. The threshold of the cell damage by a laser beam is determined for the beam with homogeneous or Gaussian intensity distribution.

A number of devices using solid-state lasers use a multimode beam. The intensity distribution in the cross-section of such a laser beam contains a lot of spikes with peak power densities well above the average value. This is a source of damage of the crystal (and windows with AR coatings) by causing multiple autocollimation trains inside the material. In such lasers, the permissible power of the laser pulse should be selected very carefully.

By using Pockels cells in accordance with the specifications, and taking care of the quality of the transmitted laser beam, they can work for many years.

In the case of KDDP crystals, which are hygroscopic, it is important to protect the crystal against the influence of atmospheric moisture. This technology can extend the life time of the cell and is an important issue for designers.

For that reason KDDP Pockels cell should not operate with a constant applied voltage. Such a type of operation is specifically not recommended and significantly shortens the lifetime of the cell.

Ultimate lifetime of the cell is eventually determined by the damage of crystal and protective windows.

Dr Wodnicki, thank you for the interesting talk! 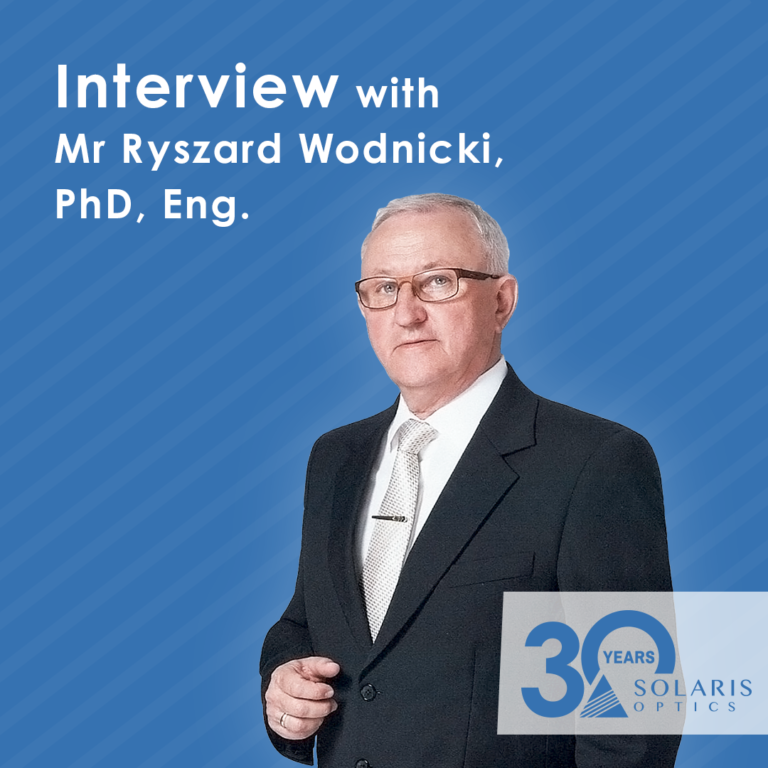